The population of South Asians particularly Nepalese immigrating to the USA in search of economic prosperity through jobs or academic fulfillment has increased in recent years. This has lead to the Hindu culture begin to spread out in the USA with ease like wildfire. In 1906, the Vedanta Society took it upon themselves to build some Hindu temples in the United States of America. At present, there are numerous Nepali Temples around the USA made by the Hindu population for their religious beliefs.

Nepali Temples in the USA

The Shree Pashupatinath and Buddha Mandir in Texas are immaculately constructed and hold statues of the god Shiva and Buddha and the various manifestations. Nepalese living in Irving, Texas, often visits the Temple during festivals like Dashain, Tihar, Shivaratri, Buddha Jayanti, Teej, and more for celebrations.

This Nepali temple run by NCSC( Nepali cultural & spiritual center). It’s main aims to provide a common place for all Nepali Hindus and Buddhists and other nationalities of these faiths to congregate culturally, spiritually and religiously.

The Pashupati –Buddha Mandir in Beallsville, Maryland, is also built with statues and depictions of Shiva and Buddha. Nepalese from all over Maryland come to worship and celebrate on special occasions. There are many donations for charity events, particularly one during the 2015 earthquake in Nepal.

The foundation has been preserving and promoting the Hindu religion and cultures along with art, and language through the amazing construction. There are also non-Nepalis who are welcome to the Temple. The rich art and culture depicted in the building are completely mesmerizing.

Hindu Buddha Temple in Baltimore, Maryland, has been made by the community of Nepalese living in the USA for a long time. The Temple is known for having the structures of Buddha and his personifications meticulously crafted. The Temple is very serene in the surroundings and is also a commonplace of worship during Buddha Jayanti and Lhosar.

The Shree Pashupatinath Mandir in Fort Bend County in Texas is one of the busiest temples during Hindu festivity since the Texans flock the Temple during Dashain, Shivaratri and also puja and rituals. Many marriages are also conducted here.

Hinduism in the USA

Despite being a minority religion in the United States regarding the population of America, Hinduism is currently growing like wildfire. Immigrants from the South Asian countries like India, Nepal, Sri Lanka, Bhutan, Maldives have brought in this religion to the USA.

Going back to 1965, the USA had a very limited number of Hindus before the implementation of the Immigration and Nationality Act that year. There are many concepts of Hinduism like Karma, reincarnation, and Yoga as well. These concepts have slowly been seeping into the USA over the years after the insurgence of the Hindus in the States.  In the 1970s the International Society for Krishna Consciousness was founded in the States, which is known to be a mass movement of that time. The Krishna Consciousness is a Vaishnavite Hindu reform organization.

The 2014 data shows that around 88% of the American Hindu population believes in god, which is enough to say that Hinduism is here to stay. Despite the belief, only 26% feels that religion has a significance in their life. Also, 51% of those pray daily. On a worldwide basis, Hindu Population administers to being the eighth Largest. Also, as per the report by the USA Department of State’s Religious Freedom, 10% of Asian Americans who are 5.8% of the USA population, are followers of the Hindu faith.

Not only are Asians the sole believers of Hinduism, but around 9% of those Hindu demographics in the USA belong to Non-Asian Ethnicity. Around 4% among them are white, 2% are Black, 1% Latino, and 2% mixed. Many prominent celebrities have converted to Hinduism.

Hare Krishna movement in the USA

Hare Krishna Movement in the USA began in around 1965 by A.C. Bhaktivedanta (Swami Prabhupada; 1896–1977). In full terms, it is dubbed as the International Society of Krishna Consciousness (ISKCON). The movement stepped in the USA as Bengali bhakti, devotional yoga tradition, or Krishna Consciousness. These come from the 16th century.

As per the history and folklore, it is believed that Bhaktivedanta was instructed by his teacher to carry Krishna Consciousness to the West while he was a young teacher. He vowed his life as a sannyasi (a religious ascetic who renounces the world) and moved to the United States to create this movement. 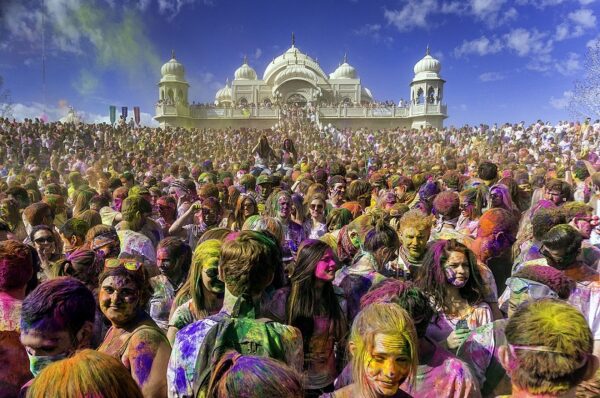 The hippies of New York were fascinated by the concept and stepped in for conversion. Eventually, they adopted the way of life of the devotee. Those that became a part of the movement began to chant and pray the hymns and eventually became one of the most popular symbols of religion in the USA.

Bhaktivedanta had a Governing Board Commission that guided the international movement. Many gurus eventually expanded the movement. As per the statistics of 1990, there were around 225 Hare Krishna Centers expanded around in 60 countries of the world. About 50 of those centers were located in the United States itself.

Followers believe that Krishna is the avatar of Lord Vishnu, who is the Lord of Lords. Also, they believe that humans are eternal spiritual beings trapped in a cycle of reincarnation. There are certain rules for membership. These members are vegetarian, do not drink alcohol and drugs, wear simple clothing, and have sex only to procreate within marriage.

As it became larger, the Hare Krishna movement got into a lot of criticism due to the accusations and assault cases. In the 1980s it was targeted by the Anti-cult Organizations after the claim of brainwashing, emotional and psychological damage, sexual abuse of children, and other such cases arose. Many of the high-class commission heads of ISKON were expelled and sent to jail in the racketing count of the group’s boarding school in India and USA

However, the Hare Krishna movement has been the center of attraction in 1960 to 1970s also depicted in famous songs by the bans Beatles, by singers John Lennon, and more.

Indian community – major factor to grow Hinduism in the USA

Among the Asian Americans, 51% consider themselves to be Hindus as per the 2012 Pew Research Center Report. There are numerous Hindu temples built by the Indian community around all the 50 states. With the growth of the Indian Community in the USA, there has been a growth in the Hindu religion which also has a lot to do with religious influence.

Hindus are the fourth largest religious community in the USA

There are many Hindu organizations such as ISKCON, Swaminarayan Sampraday, Sanstha, Chinmaya Mission, BAPS Swaminarayan and Swadhyay Pariwar which are popular in the Sates. The Hindu American Foundation represents the American Hindus and also aims to educate people about Hinduism, which adds to the major factors in the growth of Hinduism. At the 1893 Parliament of the World’s Religions, Swami Vivekananda represented Hinduism and introduced it to the West. 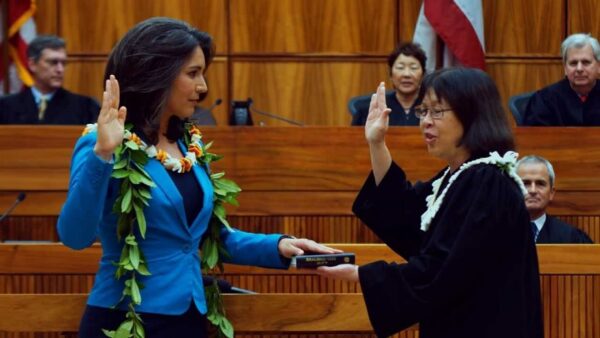 Tulsi Gabbard took the oath of office on a Bhagavad Gita at her swearing-in in January 2013. (Image source: Tulsi Gabbard/YouTube)

There are more than 18 million Americans who are practitioners of Yoga which is another concept of Hinduism. Paramahansa Yogananda introduced Kriya Yoga to America.

As per the 2001 data, there were an estimated 766,000 Hindus in the USA, which constitutes 0.2 percent of the total population in the USA making Hindus the Fourth-Largest religious community in the USA.

Do you know any other Nepali temples in the USA which are not included in this article?  Just drop a comment below. We will contact you shortly.