Lujendra Ojha is a Nepalese American planetary scientist who first time spotted evidence of water on Mars in 2015.  A 25-years-old graduate student who was part of the team that helped confirm the existence of liquid flowing water on Mars.

Lujendra’s first discovered evidence of water on Mars in 2011 when he was an undergraduate at the University of Arizona working with Professor Alfred McEwen on analyzing photographs from the Mars Reconnaissance Orbiter. Lujendra came to Arizona with his parents at the age of 15 in 2005.

It was a lucky accident: Lujendra Ojha

When Lujendra and his team discovered water on Mars, his reaction was ‘it is a Lucky accident’. He shared with BBC, “I just happened to have the biggest accident of my life. One thing that we did in this newest study is looking at the surface of Mars in a different light. We look at both visible light and infrared light and based on how different materials absorb light, we can compare that with laboratory data and make some inference about what kind of materials are present.”

Lujendra Ojha Was a metal guitarist

Before making a headline for finding water on mars Lujendra was a heavy-metal guitarist in his band Gorkha. But it was not quite popular. One time he shared with CNET, “I was kind of in poverty with music, I wasn’t making enough money so I said screw music, let’s go to science.”

Arizona Governor Doug Ducey issued a special recognition on September 30, 2015. He said on recognition, “Today I issued a special recognition honoring Lujendra Ojha, the former UofA student who helped discover evidence of flowing water on Mars. Lujendra made this discovery using HiRISE, a camera onboard the Mars Reconnaissance Orbiter which the school also operates. The University of Arizona is home to some of the best space exploration and observation laboratories in the country and works directly with NASA.” 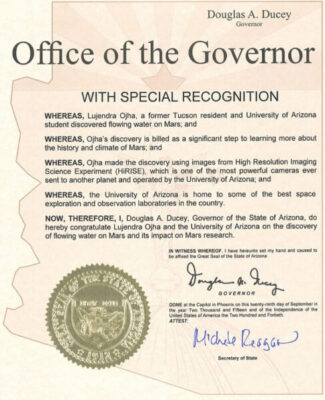 Lujendra’s some other awards and honors:

Lujendra Ojha got Ph.D. in Planetary Science from the Department of Earth and Atmospheric Sciences at the Georgia Institute of Technology. He is working as a Research scientist( 2017 – present) at Johns Hopkins University.